an urban action that opens your eyes

About the project
SEE ME is an art project of the 4th year students of the acting school in Rotterdam supervised by Lucas De Man and Bas van Rijnsoever, the founders of Company New Heroes. Lucas and Bas challenged the students to create a large image in the public space of Rotterdam from a social perspective. SEE ME is about the universal need to be acknowledged and seen in a society that doesn’t seem to give way to vulnerability. Inspired by the campaign slogan ‘Do I matter?!’, they started looking for a place typical to Rotterdam and found the skyscrapers. In just nine days they developed SEE ME, that is showcased at the Na building of Erasmus MC. Using five floors the artists are blinding the windows in a certain order to light the words SEE ME (in Dutch: ZIE MIJ). The letters are 12 to 15 meters long and cover the whole width of the building. The text was there to be seen by the whole city from Friday the 23rd of October 20:00 o’clock till Monday the 26th of October 07:00 o’clock 2015. 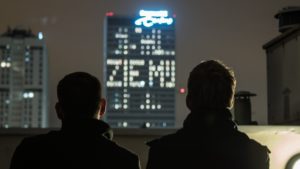 Goal
The aim of this action is to shine a light on the people who are normally passed unnoticed. At these, for healthcare, difficult times, it is important to not forget those who take care of us. Every day thousands of people are working at the Erasmus MC hospital, enabling us simply to exist. We don’t want them to disappear behind the walls of the hospital unseen, so we are breaking these walls down. Everybody deserves to be seen. By shining light at a lot of people we shape the words SEE ME. The statement is consciously written in a singular form, this is an essential and touching aspect of it. SEE ME applies to everyone, to all its viewers where ever they may be.