YOU DON’T HAVE TO

JE MOET NIET (YOU DON’T HAVE TO) is a light installation and a concept of Lucas De Man and designed by Pascal Leboucq. In 2016, with the support of the Verkadefabriek, they secretly gave the artwork to the city ‘s-Hertogenbosch as a goodbye present from Lucas after four fantastic years as city artist there.

In those years many beautiful projects were realised, in collaboration with the municipality of ‘s-Hertogenbosch, partners, artists, Het Zuidelijk Toneel and of course New Heroes. Without all these people, projects like OOG (EYE) and WOLK (CLOUD) would have never been possible.

Light installation JE MOET NIET is about one of the most important themes in our work: public space as a place of encounters, a place for everyone, where you can simple be.

The installation was made and placed on a roof in the central market in secret, even the municipality didn’t know whose it was at first. The artwork remained on the Markt until 20 February 2017 and travelled to other cities such as Tilburg (2017) since. 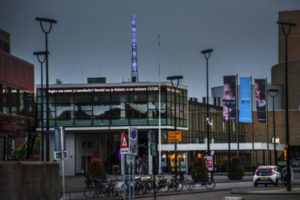