In the Fall of 2012 The Province of West Flanders, 3 art centers and 11 cities and municipalities proposed a touring project about Identity in West Flanders.

In Us, Pig Country artists Lucas De Man and Gilles Coulier joined forces for an artistic research into the Identity of West-Flanders. With a theatre show, a short film and a huge multi-medial pig they toured past 8 municipalities (Meulebeke, Kortemark, De Panne, Poperinge, Diksmuide, Menen, Zonnebeke, Tielt) stopping for one weekend in each city. Every city organised a program of activities for the locals and created their own public art installation, always inspired by the iconic image of the pig and. As final showstopper all the art creations from the participating cities were exhibited in Kortrijk, Oostende and Brugge. 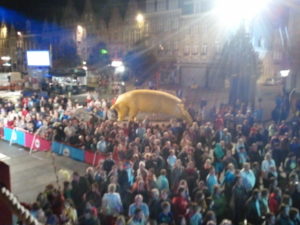 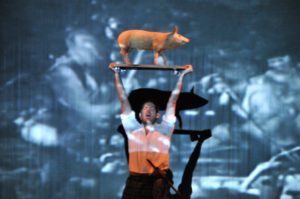 With over 230 partners, over 20.000 visitors, over 30 media reports and a world record in writing a story with as many people as possible, this is one of the biggest projects New Heroes realised. In addition Gilles Coulier’s short was selected for Cannes in 2013!

Since 2013, We, Pig Land the theatre show has been performed in multiple European countries in Dutch and English. For more information or to book email booking[at]companynewheroes.com