IT WILL ALWAYS BE DIFFERENT

On the great wall at the headquarters of the Rabobank in Utrecht, Company New Heroes has created the artwork HET WORDT ALTIJD ANDERS (IT WILL ALWAYS BE DIFFERENT), in collaboration with 10 kids of primary schools (2016). The idea of Lucas De Man is designed by artist Pascal Leboucq. And because it will always be different/turn out different then planned, we gave children aged 7 to 12 the chance to fill in the letters on the wall with ballpoints. 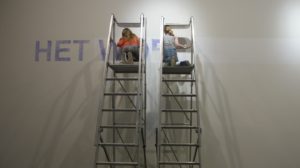 For a week we have drawn with two new kids every day on 2,5 meters high platform stairs, armed with dozens of ballpoints. Every day the children tried to finish at least one word so they could remove the template themselves. Every time a template was removed rough lines made place for a sleek design. 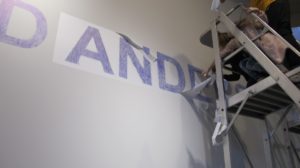 HET WORDT ALTIJD ANDERS is there to remind bankers and entrepreneurs about the world outside of the grey offices of the financial sector. Always be open for change and keep in mind that life never goes exactly as planned. We are glad to show this message at the headquarters of one of the biggest banks of the Netherlands. This project was part of the Artist in Residency of Company New Heroes at the Rabobank Netherlands.